Washington, D.C. – Renowned actor and comedian Jim Gaffigan will perform live at the first-ever NAB Show Sunday Kick Off on April 19 as part of his 2020 “The Pale Tourist” comedy tour. With the shift of the NAB Show dates, the Kick Off was added to celebrate opening day for the Show Floor.

Gaffigan is a five-time Grammy-nominated comedian, actor, writer and producer. Two of his books have topped the New York Times best-sellers list, and he has received two Emmy Awards for his contributions to “CBS Sunday Morning” where he is a regular commentator.

“Jim is known for his unique brand of humor and we are excited to kick off this year’s Show with an energetic opening and some good laughs,” said NAB President and CEO Gordon Smith, who will introduce Gaffigan at the Kick Off event. “I can’t think of a better way to celebrate the new show pattern and welcome the 2020 attendees.”

In addition to two seasons of the critically acclaimed semi-autobiographical “The Jim Gaffigan Show” and his stand-up comedy specials, Gaffigan has guest-starred on many television comedies and dramas, including “Portlandia,” “Bob’s Burgers” and “Law & Order.”

His film credits include “Three Kings,” “Super Troopers,” “Super Troopers 2,” “Chappaquiddick,” “Being Frank” and “America Dreamer.” Gaffigan also appeared in three films that premiered at the 2019 Sundance Film Festival including, “Them That Follow,” “Light From Light” and “Troop Zero” with Viola Davis and Alison Janney, which is now streaming on Amazon Prime.

NAB President and CEO Gordon H. Smith’s State of the Broadcast Industry address as well as the presentation of the Spirit of Broadcasting Award and the Distinguished Service Award will remain on Monday and will take place at the NAB Show Welcome event on April 20. 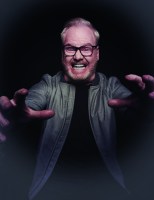