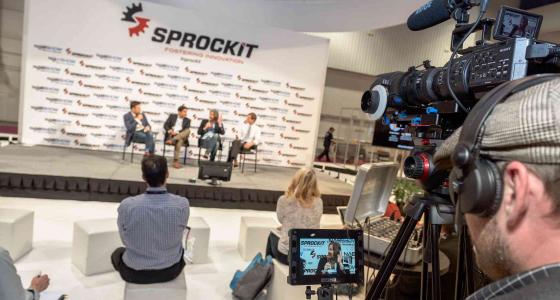 Startups in hot sectors like social media and health care may grab the lion’s share of attention in entrepreneurial circles, but media and entertainment have their own share of rising startup stars. In fact, several startups will enjoy some time in the spotlight at the upcoming 2016 NAB Show, April 16-21 in Las Vegas.

Like it’s been in years past, the 2016 NAB Show Floor will be a hub of media and entertainment innovation, as startups will get a shot at success through two vehicles. One is the StartUp Loft, a launchpad for industry startups that’ll offer first looks at their products and services. The other vehicle is SPROCKIT, a year-round program showcasing market-ready startups poised to transform the media and entertainment industry.

Startups involved in the StartUp Loft and SPROCKIT compete in an array of sectors, such as OTT/TV 3.0, programmatic/addressable advertising, data analytics, content monetization, content creation and syndication, and social engagement/interactivity. These sectors and others represented by startups at the NAB Show are on the cutting edge of software, hardware and services for the media and entertainment business.

Here are just three of the startups that will be featured at the StartUp Loft.

This video technology startup just raised $2.5 million in funding. The company says it “aims to help broadcasters overcome one of the biggest challenges facing the web today: the explosion of online video.”

Relying on peer-to-peer protocols, Steamroot’s system connects users watching the same stream, letting them obtain content from the source that can deliver it the quickest, whether it’s a server or another viewer.

“As video continues to grow, innovative distribution solutions are needed to both help publishers remain profitable and to keep video from ‘breaking’ the Internet,” says Jeroen Wijering, one of the investors in Steamroot.

This human-language technology startup recently named a new CEO. Adam Sutherland took over the role from co-CEOs Mohammad Shihadah and Mudar Yaghi, who remain with AppTek as co-founders and chairmen.

“AppTek continues to grow and garner traction with customers all over the world. Adam’s experience with technology, media and international business make him the perfect leader to take AppTek to the next level,” Yaghi says.

AppTek provides timesaving and cost-effective automatic language translation — from text to text, speech to text and speech to speech.

Banjo says it “instantly organizes the world’s social and digital signals by location, giving an unprecedented level of understanding of what’s happening anywhere in the world, in real time.”

Like the rest of their StartUp Loft cohorts, Banjo, AppTek and Steamroot hope to capitalize on their time in spotlight at the NAB Show. It certainly would not be the first time that has happened.

Just a few months ago, after last year’s NAB Show, Stringr, a member of the SPROCKIT Class of 2015, received $1.5 million in funding. The Stringr marketplace lets a media organization, such as a TV station, buy video from amateur and professional videographers. If the organization previews the video and likes it, the HD version of the footage can be downloaded immediately. More than 10,000 videographers belong to the Stringr network.

Lindsay Stewart, CEO and co-founder of Stringr, says: “As a former producer, I faced the challenges of securing quality content under tight deadlines — it was a broken model that we had to fix. Stringr brings this traditional process into the 21st century while giving videographers new opportunities.”

Just as Stringr has enjoyed opportunities since last year’s NAB Show, startups like Banjo, AppTek and Steamroot are hoping their experience at the 2016 NAB Show will propel them toward even greater success. These and dozens of other startups are eager to show this year’s NAB Show attendees why they’re primed for success.

Don’t miss out on the next big thing – see the industry’s rising stars at the 2016 NAB Show. Use code BA52 at checkout before April 1 for a free Exhibits Pass, which gives you access to all exhibits, including StartUp Loft and SPROCKIT, and general and info sessions. For access to your choice of three sessions from the Conference Program, you can add a Session 3-Pack for just $150.

Previous post In wake of Sony hack, what does future hold for cybersecurity? Next Post Beyond Movies: UltraHD Sports & Linear Programming