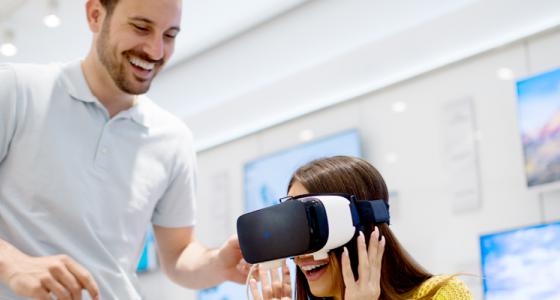 Location-based virtual reality, which enables immersive VR experiences at brick-and-mortar spots like shopping malls and movie theaters, has become the place to be in VR these days. In fact, China already has more than 3,000 VR arcades, which often have “fully loaded setups—with ‘stunning booths that stand out by an extensive use of hardware like special seats and reproductions of vehicles,’” according to Forbes.

Even in the United States, location-based VR continues to show promise as a way to monetize VR and boost adoption. Greenlight Insights, a market research firm specializing in VR and augmented reality (AR), predicts spending on VR hardware, software, content and services at away-from-home entertainment venues will reach $1.2 billion by 2021.

Location-based VR is likely to be a big part of the buzz at the Immersive Storytelling Pavilion during the upcoming NAB Show, April 7 to 12, in Las Vegas.

Adding to that buzz is the recent rollout of location-based VR experiences, such as Star Wars: Secrets of the Empire. A startup called The Void, in conjunction with Lucasfilm’s ILMxLAB, is setting up VR “experience centers” based on the latest Star Wars installment, according to Variety. Already open or about to open are centers in London; Orlando, Florida; Anaheim, California; Glendale, California; and Las Vegas.

The Glendale and Vegas centers are being established in shopping malls owned by mall giant GGP. Offering participants premium content and a social experience in one, location-based VR can also reinvigorate mall spaces.

This kind of undertaking is part of what VentureBeat calls a “pivot” toward location-based VR.

Another manifestation of this trend is the VR arcade, or VRcades, which are popping up at shopping malls, like the ones operated by GGP, as well as at movie theaters and casinos and even as standalone VRcades. Already flourishing in Asia, VR arcades allow customers to purchase and try a range of immersive, interactive entertainment experiences within one space.

At a recent panel discussion on VR arcades, Nicholas Cooper, chief creative officer at VR kiosk maker VRX Networks, emphasized that the quality of content is key for VR arcades. “If you have a great social experience or a singular experience where you’ve bonded with the characters or the game, that’s what’s going to keep people coming back,” Cooper said. “You go to old-school arcades, and you crank your dollars through, but it’s about how much fun you have with your son playing Whac-a-Mole or something like that. Emotional connection through customer experience, through the content in the games—all of that.”

Movie theaters are seeking to tap into that emotional connection with location-based VR. AMC Entertainment, the world’s largest chain of movie theaters, teamed up last year with Dreamscape Immersive, a startup specializing in location-based VR, to ramp up this new VR innovation.

As part of their partnership, AMC has invested $10 million in Dreamscape Immersive and is financing as many as six VR centers within AMC theaters or at standalone locations in North America and the United Kingdom over an 18-month period. AMC also is chipping in $10 million for a fund aimed at developing VR content.

Dreamscape Immersive’s flagship location at Westfield Century City mall in Los Angeles is opening in the first quarter of 2018. Noting that audiences today can watch movies in three formats—2D, 3D and IMAX—Dreamscape says VR represents the fourth iteration of moviegoing.

Unlike other VR platforms, Dreamscape Immersive says it’ll offer a “social experience” enabling participants to interact with up to six people simultaneously, without being tied to a computer. “Now, audiences will have the ability to purchase a ticket, step inside of the story and experience it personally in a way never before imagined,” says Kevin Wall, co-chairman of Dreamscape.