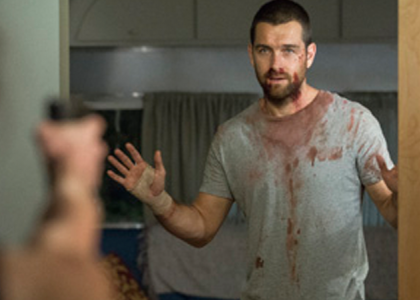 For those of you lucky enough to have discovered Banshee on Cinemax, you know just how fun a ride it can be… and just how violent. The amount of blood spilled would make Quentin Tarantino proud.

The show recently finished its third season run of action-packed goodness, and while the episodes featured many in-your-face visual effects — I urge you to search for “Chayton’s Death Scene” on YouTube — courtesy of Zoic Studios, there were also many effects that were just, well, face effects.

If you are a viewer, you know that most of the characters aren’t who they appear to be, and the audience is let in on their back stories via flashbacks. That is where Technicolor Flame artist Paul Hill comes in… de-aging for a few cast members in a digital yet seamless way. (Keep an eye out in this space shortly for our interview with Paul Hill.)

But that’s not all Technicolor provides, says the show’s associate producer, Gwyn Shovelski (@gshove00). She typically hands Hill 50-plus shots per episode, ranging from a modesty patch (it is Cinemax so there might be a lot of these) to costume fixes, monitor comps, cosmetic fixes, de-aging, boom shadows, muzzle flash additions, crew and/or equipment removal, reflections and flares.

“Some of the heavy flashback episodes, though, could have as many as 100 shots just of de-aging,” she explains. “As for Zoic (which handles the more heavy visual effects), we can have as little as five to 150 shots, depending on the action of the episode.”

When it comes to picking and choosing which studio gets which shot, she breaks it down like this: “Anything extensive, like a CG vehicle flip, blood enhancement, debris hits, heads or other body parts being blown off, typically goes to a visual effects house, and in the case of Banshee, we go to Zoic, which have the resources to complete the shots in a timely manner for broadcast cable television.” Shots more on the 2D scale that are in need of augmentation are handed off to Hill who works directly off the file at Technicolor — meaning there is no additional data management.

In terms of workflow, after the HD show is assembled, Shovelski does a review with the Technicolor editor Ray Miller, who works on Avid Symphony 6.5. “A more extensive QC of the uncolored show follows; this is where I generate a list of shots for Paul to work from. At this time I can also catch possible missed Zoic VFX shots we would have spotted in editorial using DNX36 as our source material.”

Before handing off the list to Paul, she goes into the color-timing bay — working with Gareth Cook on the DaVinci Resolve 11 — to see if she can eliminate a few shots. “Our show is pretty dark, which becomes advantageous in that you won’t see, for example, reflections or modesty patches with final color,” she explains.

Before and After: Technicolor’s Paul Hill de-ages characters in Flame.

Hill then takes the DPX file into Flame 2015 and works from the uncolored material. Once he has completed the episodic list, Shovelski reviews each shot and gives notes as needed. “We’ve worked together for several years now, including on HBO’s True Blood, so he pretty much knows how far I want him to go on a shot. The number one advantage to our workflow is that all artists (editor, Flame, color) work simultaneously off one file. Paul literally shows me the shots in his bay where I approve on the spot or ask for more or less. He then does an export and I render the shots back into the color-timed master.

“The Zoic approval process is more extensive given the need to send a bin to editorial for the assistant editor to pull into the Avid,” she continues. “Allen (co-producer/head of post production Allen Marshall Palmer) and myself give notes or approve before they send the final shots to Technicolor to drop in and color.”

Whether the effect is benign or over-the-top, it’s always part of the show’s fun ride. Banshee has been renewed for a fourth season, which will begin airing in 2016. So you have some time to binge and catch up.