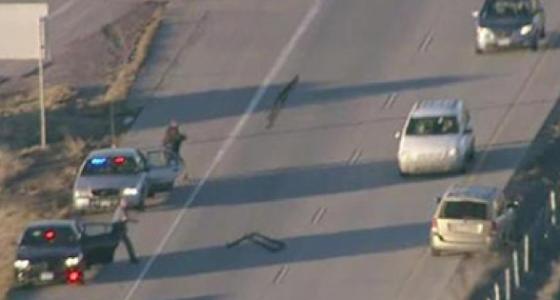 With vast amounts of video growing vaster at a rate faster than the day before, and the hottest devices like drones decreasing in price and size until everyone has one (OK, not in their pocket quite yet) it’s time to start talking about mining this mass of valuable video data for useful purposes.

Julian Mann, the cofounder of Skybox Imaging — a company in the business of commercial satellite imagery and the developer advocate for Google Earth outreach — says that the new “Skybox for Good” program will provide “a constantly updated model of change of the entire planet” with the potential to “save lives, protect the environment, promote education, and positively impact humanity.”

Why? Google wants to understand what’s happening on this earth in real time. In August, it entered into an agreement to acquire Skybox, the company that launched two of the world’s smallest high-resolution imaging satellite. They orbit the earth and collect high-res images and video every day. The company plans to launch as many as 24 of these satellites, allowing Google to get near real-time data about the entire Earth.

Google will turn those pixels into data using sophisticated image processing and computer vision software, running on the immense Google cloud. A Skybox satellite might photograph or video a particular city several times per day, not for the static or moving imagery, but for the data gathered in each frame of each image. The significant value of the data comes from comparing it across time or location, looking for change. For example, when is that store’s parking lot full? What is the progress of the highway construction to build a new overpass? Which roads are open for faster delivery service during the day? Which movie theaters attract the most customers week-to-week? How have weather patterns changed over the past 24 hours, or from the same time last year?

Mining video data through “man + machine” artificial intelligence is new technology in search of unsolved problems. Could this be the next chapter in the ever-evolving technology revolution?

For the past 50 years, satellite imagery has only been available to the U.S. intelligence community and those countries with technology to launch their own. Digital Globe was one of the first companies to make satellite imagery available commercially, and now Skybox and a few others have joined them. Drones are even newer, having been used by the U.S. military since the ‘90s for surveillance over battlefields or, in this age of counter-terrorism, playing the role of aerial detectives finding bad guys in the middle of nowhere. Before drones, the same tasks required thousands of troops on the ground, putting many young men and women in harm’s way. Today, hundreds of trained “eyes” safely located here in the U.S. watch hours of video from a single drone to assess current situations in countries far away.

Google is interested in satellites in space taking constant video of earth, and Facebook and Amazon are interested in drones for a myriad of reasons, from imaging to package delivery to wireless Internet delivery in rural areas and more.

Watching videos can be tedious and fatiguing for humans. Computers don’t get tired of watching thousands of hours of a robot scanning an underwater pipeline. They can detect a crack on frame 111,432 and alert a human expert to have a closer look. A human might see the crack after watching all those frames in real-time. Might.

Two years ago, the police needed hundreds of detectives and hours to cull through massive amounts of surveillance video taken around the scene of the bombing at the Boston Marathon to assemble the clues that ultimately identified and located the bombers. What if they had software to help them catch the bad guys sooner?

Even more importantly, imagine all the new opportunities created by this growing mass of video data. The ideas are infinite, and we know that in our innovative world, a commercial industry or two will establish itself in light speed.