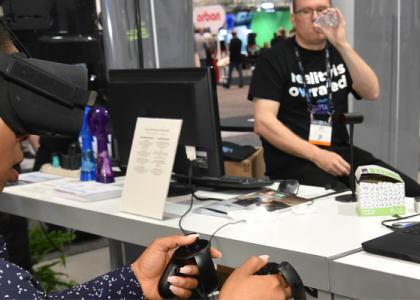 Broadcasters and content owners are racing to make viewing experiences more powerful and immersive for their viewers, who increasingly consume live and on-demand programming on the move, across several devices and platforms. At the same time, they are competing for the attention of younger, digitally savvy audiences, who have an insatiable appetite for bite-sized content and highly customized entertainment experiences.

Take the sports industry as an example. When the world of technology and sports combine, fans don’t have to just read about it or watch it on television – we are approaching a world in which a fan can become part of the experience right from their homes, even tapping into various sporting events from around the world.

While virtual reality is certainly making waves in the industry, it’s fair to say that the technology has not yet hit mainstream. To begin with, not everyone has a VR headset to watch virtual content. While full-fledged VR experiences are still gathering momentum, the best way for broadcasters and content owners to bring their audiences more immersive sports experiences is through live 360 degree video. It gives audiences a VR-like experience without the need for a headset, whether they’re at home or on the move. It’s not about taking viewers away from the live action on TV, but about enabling them to get different perspectives by panning around the pitch or circuit during a key moment for their favorite player or driver.

A 360 degree view of the action

360 degree video is one of the newer technologies that could bring a new dimension to sports experience. An example of how this technology can reach fans is, for example, during a racing event, as a driver pulls into the pit for a tire change, fans could complement the action on TV with a live 360 degree view on their tablet of everything that is happening in the pit lane in real-time. When 360 degree video feeds and TV broadcast are in complete sync, it creates a new experience separate to the core of the action, but about augmenting the overall viewing experience by transporting fans to the heart of the event and enabling them to experience the action almost as if they were there.

Reaching fans by generation, and by region

Different sets of audiences will need different experiences: for many sports, the core fan base will want to watch every part of the action, whereas tech-savvy millennials will want an always-on, but dip-in-dip-out experience using different social platforms – customization and personalization are important.

Eliminating the delay in 360 degree video means that, for the first time, it’s possible to offer fans a truly live, 360 degree video experience on a global scale. This will enable sports and entertainment organizations to engage with their audiences in new ways and generate new revenue streams – helping the 360 degree video and VR market achieve its USD $60 billion potential, according to ABI Research.

Whether through virtual reality or live 360 degree video, it’s paramount for broadcasters and content owners to harness the power of the latest digital technologies to stay relevant and competitive, and generate new revenue streams. Only through constantly driving to innovate through new content delivery methods can they keep their audiences tuned in, hungry for more captivating sports experiences and inspire the next generation of fans as well.