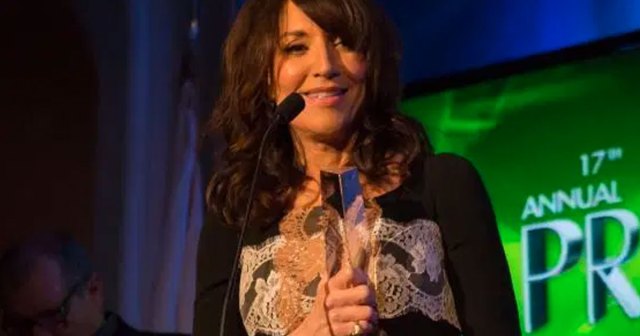 One such award winner is actress Katey Sagal. Known to generations as Peggy Bundy from Married with Children, Sagal subsequently earned a PRISM Award for performance on the sitcom 8 Simple Rules. Most recently she could be seen as matriarch Gemma Teller Morrow in the hit FX original series Sons of Anarchy (SOA). In the series, Sagal’s character of Gemma Teller Morrow abuses drugs and alcohol. In some ways, Gemma may be a dramatized reflection of Sagal’s own lived experiences. After more than 20 years of sobriety, Sagal opens-up about her recovery, and being in recovery in Hollywood, during her PRISM award acceptance for Female Performance in a Drama Series Multi-Episode Storyline.

What do you think is exciting about your character in SOA, and why are you passionate about having an opportunity to teach through media?

“I think of it in terms of service. I think that whether you are giving a message of recovery, which gives the message of hope. Even if you are showing the ‘misgivings’ of addiction, you are giving the message of hope because someone at home is possibly relating to that and possibly going to go and then seek help. I look at the whole thing as service. It’s just a blessing that I am able to do the things, to be an actor to have a job, to be in these kinds of roles or any kind of role, really.

I mean this is interesting — just the other thing I want to say about this — when I was on Married with Children, I would have people come up to me a lot that were either in the stage of their recovery, because I was pretty vocal about getting sober, and it would help them to know that there was somebody sober that they could see on the TV. So I knew early on in my recovery that that was a benefit.”

What are some interesting or unique challenges you faced in portraying your character’s drug use in its stages over this long-term series?

“She was never written to have a disease; she lives in a subculture. She smokes pot a lot. I don’t think that she thinks she has a disease. In one of the past seasons I was given a certain storyline, I sort of decided, that perhaps in her younger years she drank a lot, and sort of decided to stop on her own. What ends up happening in one of the episodes this last season is that she gets loaded beyond control, she is drinking a lot, which is what she used to do – in other words she is in that stage, I don’t think she is person who says she has a disease.  That would be my answer to that.

As it relates to the storyline are there ways in which you relate to Gemma?

“I am now sober [over] 26 years. But before that happened, it’s not that I lived the life my character lives, but shades of it. It’s interesting to me that I am put into a position of service by depicting what that life and what those consequences are. She definitely suffers the consequences of not her addiction, but her over use, her abuse.

I guess the answer to the question is, I totally relate to the concept of things not going my way and checking out. That is how I dealt with things for many, many years of my life.  And, for a while it worked, worked really well. And substances do have a shelf life. SUBSTANCES have a shelf life. They don’t continue to work, I do relate to that part of her.”

“Well look at what she did. She drove high on weed. She endangered the people she loves the most. She didn’t think about consequences. That is what I meant earlier, in my own back-story of her. This was behavior she had when she was younger and swore she was never going to do again. Which is the story of addiction: as addicts we always swear we are never going to do it again.

Want more? Come to the 2015 NAB Show where EIC will produce a Creative Master’s Series session entitled One-On-One: A Top-Rated Series Cast Member Talks Authentic Storytelling. During the session, EIC’s Skylar Jackson goes one-on-one with PRISM Award winning talent to discuss the impact of authentic storytelling. Speakers will examine the influence of entertainment and media on vast audiences and the power of accurate portrayals on attitude and behavior change. This is a unique opportunity to directly interact with those who create informative and empowering television content.