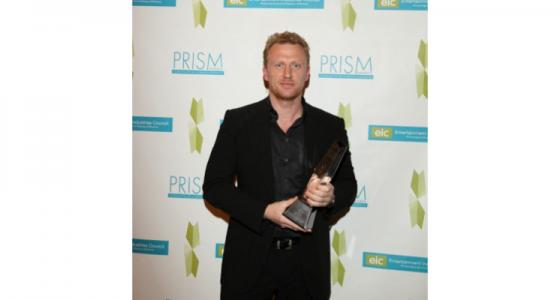 Best known for his role as Owen Hunt in the award winning television series Grey’s Anatomy, Kevin McKidd sat down with the Entertainment Industries Council after winning a PRISM Award for best Performance in a Drama Series Multi-Episode Storyline to discuss the power of media to inform and inspire. For seven years, McKidd has immersed himself in the world of Dr. Owen Hunt, Chief of Surgery at Grey-Sloan Memorial Hospital, who has been diagnosed with post-traumatic stress disorder after serving as a trauma surgeon in Iraq. In his interview, McKidd stressed the role that the entertainment industry plays in mental health and breaking down stereotypes.

“There are so many stigmas attached to addiction and to mental illness and that keeps people locked in them. And I think the more the entertainment industry can keep pushing those boundaries and telling those stories and keep raising awareness, then hopefully that flame will be kept alight.”

Drawing attention to some lesser-known struggles that are associated with post-traumatic stress disorder, McKidd shed light on how the disorder can affect interpersonal relationships. He said, “One of the biggest challenges for families and loved ones of [people with] PTSD is that there’s a trigger and a time bomb that’s waiting to go off and that’s kind of the tragedy that can really break relationships apart, because once trust disappears it’s very hard to rebuild that.” Dr. Owen Hunt discovered the reality of this when PTSD tested his personal relationship with Dr. Cristina Yang. While clearly challenging, McKidd commented on how mental illness does not necessarily mean all hope is lost.

“I’ve been very lucky that I’ve never struggled with anything myself but I do know from delving into this man, Owen Hunt, … who is dealing with his disorder, that there is a lot of hope and it’s not a thing you’re stuck with. It’s a thing that’s part of a journey and it might be hard sometimes but if you take the right steps, everything is surmountable, I think. So that’s what my character’s story is: he knows he’s dealing with this thing but knows that he can pull himself out of it and maybe become a better person from it.”

When asked to explain how he prepared for a character with PTSD, a disorder he had never personally experienced, McKidd replied, “I used a lot of source material. I was nervous when I was offered the role depicting someone like Owen Hunt who shows signs and then is confirmed to [have] post-traumatic stress disorder, so I did a lot of reading. I read a lot about not just PTSD, but also a lot of biographies and blogs and memoirs of servicemen and women, mainly trauma surgeons; there are many books written by trauma surgeons who served in Iraq and Afghanistan. So I used that to try and really get into that headspace of what it might be like to, on a daily basis, deal with that much carnage and bloodshed and death and destruction, and then go to the material and the medical books about the treatment of PTSD. I talked with army liaison officers who helped integrate troops back in to civilian life. I wanted to try to depict it as truthfully as possible without having to go into a warzone and experience it for myself, you know?”