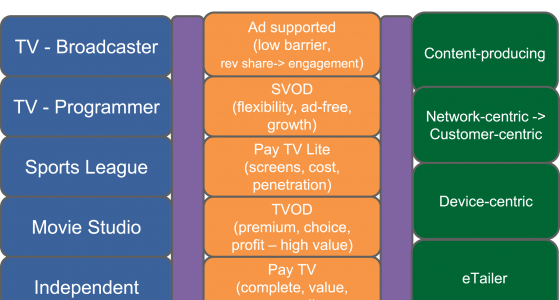 Both Sides Are Unhappy with STELA Progress.

Reports have emerged (the best summary appears on Multichannel News, “Group to FCC: Avoid ‘Walled Garden’ Approach to Video”) that both sides are unhappy with the progress of STELA. The debate comes down to this:

As background, The FCC mandate limits the scope to “downloadable conditional access” to enable retail products to play content from service provider services. Of course, this narrow scope replaces the physical Cablecard standard, which broke open the gates of competition in the set-top box market, away from the duopoly of Cisco (formerly Scientific Atlanta) and Motorola (then General Instruments, and now ARRIS) to allow players including Humax, Samsung, and Pace into the market. It also paved the way for retail TiVo boxes (despite technical challenges around tuning adapters for switched digital video implementations), although the set-top free household never emerged, as only one or two models of TV ever included a CableCard slot.

In one sense, a replacement has already emerged for service provider delivery to retail devices, based on the FCC definition of an “IP output”. The FCC writes that boxes “shall comply with an open industry standard that provides for audiovisual communications including service discovery, video transport, and remote control command pass-through standards for home networking.” For background, please read an earlier ABI Research insight on CVP-2, now VidiPath. This standard, which is embodied by DLNA’s VidiPath technology (DirecTV’s RVU also likely meets the definition). Note that we conducted a webinar for DLNA on VidiPath. This standard delivers a remote UI from a set-top box to a retail device, as well as delivering video using DTCP-IP standards within the home.

Against a Backdrop of a Competitive Environment

Overall, it is clear that there is significant innovation and choice within the consumer video landscape. Significant, new, differentiated services are being launched on a nearly monthly basis, including Dish’s Sling TV, Sony’s Vue, HBO Now, a new Showtime service, etc. In addition, traditional Pay TV providers are developing thinner and thinner packages (litigating with content providers over them) for “cord cutters,” with better economics than have traditionally been available for Pay TV. Consumers now have excellent choices of subscription VOD, transactional (rental and purchases) movies and TV, and ad supported content.

Interestingly, a number of dynamics have emerged in the over the top (OTT) world of Netflix, Amazon Instant Video, and iTunes that, we believe, will favor the service provider positioning over the CE OEM positioning.  Specifically, it is clear that service providers have the capability to choose the devices, locations, and content they make available. Netflix has chosen a penetration strategy, aiming to be on every internet connected device with a screen, while Apple has been more judicious, favoring Apple products as well as PC’s (through iTunes). Apple generally allows competing subscription services through the iTunes App Store (Amazon Prime Instant Video, Hulu Plus), but unless the service provider will offer revenue share for the rentals, Apple politely declines the opportunity.

Finally, at times Netflix has made its catalog available via APIs – allowing other services to “index” the Netflix catalog. Currently, based on our understanding, those APIs are only available to companies with a specific licensing agreement with Netflix (i.e. Roku has an agreement to include Netflix results in universal search). Of course, this allows service providers to define their business intent (allow traffic to the service while not being devalued to a content provider as opposed to an experience provider), and evaluate each opportunity on its own merits. There are technical wheels at work here too – developments toward universal content IDs (which could point to a show, a season, or an episode) make content more universally accessible. However, companies that have that linked up in a database (such as Rovi and Gracenote / TMS) will typically only provide it under license with a service provider, such as Netflix. Further, encryption of URLs is one of many obfuscation techniques in use to make it harder to scrape service catalog details.

The minimal arrangement that the STELA group could do is basically to endorse a variation of the HTML5 EME / MSE extensions. This would essentially allow service providers to choose a DRM provider and deliver content securely to any device which met their criteria. Tuning of modern set-top boxes and modern Pay TV services can be done only within a closed system, or by leveraging a standard such as VidiPath. These services have a mix of live content (well indexed by metadata providers), DVR content, VOD content, and interactive ads, all of which are delivered over a mix of relatively fixed location yet encrypted channels, switched digital video channels which are delivered on demand, and IP delivered channels.

As we discussed in the Netflix-Roku case, as well as Amazon’s decision about what services to deliver on an iPad through the App Store, negotiated revenue sharing is a business relationship well understood and within control of the service providers and device manufacturers.

Based on our belief that service providers’ ability to control the integration and delivery of their experience will be held up by the FCC and STELA commission, another solution to the impasse would be to develop statutory licensing rates. This would allow, for instance, a new CE manufacturer to deliver a service composed of a mix of HBO, ESPN, and ABC content with highly personalized menus. It would do so based on a rate table that determines the rates at which a wholesaler could aggregate content. Of course, negotiated license rates would be better – but it could provide a starting point for new services. This would provide the entry into a new wholesale arrangement, but may occur at the expense of control of exclusively licensed content.

Copyright Allied Business Intelligence, Inc. All Rights Reserved. This document is protected by US and International Copyright Law. No part of this document may be republished or entered into an information storage / retrieval system or database of any kind without the expressed written permission of ABI Research.  This article was contributed to NAB Thought Gallery for posting by ABI Research.