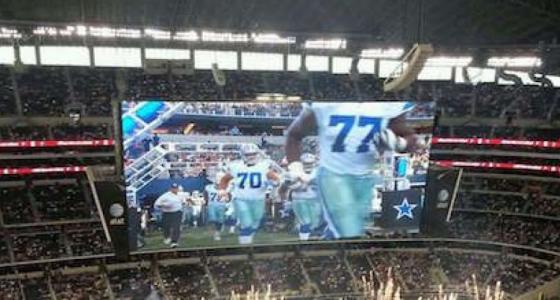 In stadiums and arenas across the country, players take the court or field and dazzle the crowds with their physical feats. However, another player is grabbing a bigger and bigger share of the spotlight at these venues: technology.

Modern-day venues, both new construction and redesigns, are being tricked out with impressive Wi-Fi, video systems and more. These venues represent how technology is transforming public spaces, including retail and mixed-used facilities, into increasingly connected places.

“We live in a world transformed by digital technology, and as a society, we’ve developed heightened expectations about how technology should support us—at work, at home and even at stadiums,” said Chuck Berger, president and CEO of Extreme Networks, which last year was named the NFL’s official Wi-Fi technology provider.

Sports venues are among the many public places that are advancing the Wi-Fi and video trend, and NFL stadiums are at the forefront. Why? For one reason, a Cisco study found that 57 percent of sports fans would rather watch games at home than at stadiums.

“It’s pretty expensive to take your family out to an event these days, and the competition is a nice warm couch, your own bathroom and a big TV,” Chris White, general manager for Cisco’s sports and entertainment group, told TechRepublic.

To help attract those warm-couch fans, the NFL has called on each of its 31 stadiums to be equipped with Wi-Fi by 2016.

“We want to make sure that our fans, when they come into their stadiums, don’t have to shut down,” NFL Commissioner Roger Goodell said in 2012.

The center-hung video board contains 30 million light bulbs and 25,000 square feet of video displays. It would take 4,920 52-inch flat-panel televisions to equal the size of the board, which weighs 1.2 million pounds.

Esther Lee, senior vice president at AT&T, said the high-tech bells and whistles at the Cowboys’ palace, which opened in 2009, are “unmatched.”

“We set out … to create not only the most technologically advanced stadium, but also the most engaging fan experience that exists in the world,” Lee said.

During Cowboys games, an in-house production crew employs eight high-definition cameras to provide video content. Producers actually work in a control room inside the stadium. On 3,000 video screens throughout the stadium, fans can catch on-the-field action when they’re away from their seats and the gigantic video board.

Wi-Fi at AT&T Stadium also stands out. The stadium’s Wi-Fi connectivity equals 17 cell sites, enough to power the Dallas suburb of McKinney. The Wi-Fi system features 1,500 access points, along with more than 1,300 distributed antennae, and the system helps link fans to the stadium’s interactive app.

Halfway across the country, the San Francisco 49ers also are playing in a high-tech home. Levi’s Stadium, in the heart of Northern California’s Silicon Valley, includes:

In explaining the high-tech touches at Levi’s Stadium, Al Guido, chief operating officer of the 49ers, said, “We can no longer tell the fan, ‘Come to the game and be unplugged for six hours.’”

One big difference visitors will notice between AT&T Stadium and Levi’s Stadium is the lack of a humongous video board at the 49ers’ home. Levi’s Stadium, which opened in 2014, emphasizes software over hardware, according to NinersNation.com.

“If you just want to sit and watch the game, you can just keep your phone in your pocket,” NinersNation.com says. “If you want to watch through specific cameras, follow instant replay and check out pertinent details about given players, you’ll be able to do that as well.”

Whether consumers prefer to unplug or tune in while at the game – or at one of countless other connected public spaces and venues – it’s clear that they want options and that high-tech capabilities have become a prerequisite for any modern facility.