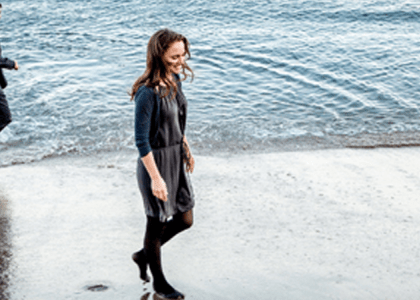 Terrence Malick’s Knight of Cups, which premiered at the Berlin Film Festival in early February, has literally been years in the making. Shot in 2012, on 35mm, 65mm and a variety of digital formats, Knight of Cups has had a two-year post-production cycle.

For the film, which stars Christian Bale as a Hollywood screenwriter having a sort of crisis of conscious, the director called on frequent collaborators, such as cinematographer Emmanuel Lubezki, who has a brand-new shiny Oscar for his work on Birdman, and Modern VideoFilm colorist Bryan McMahan, who also graded Malick’s Tree of Life and The New World, among other titles.

McMahan’s relationship with both Malick and Lubezki (also known by his nickname, Chivo) goes back about 15 years. That is a level of comfort that is hard to quantify.

We reached out to McMahan to learn more about Knight of Cup s— its workflow and his process grading dailies as well as the final product.

When did you start work on the film?

They had me do the dailies two years ago when they shot it so we could keep the color all the way through. This was very interesting to me because it had been 30 years since I had done feature dailies, but it worked out well.

Thirty years? The technology’s changed quite a bit since then!

Yeah, a little bit! Thinking back to the last time I did film dailies, it was with a work print and one-strip mag… that was quite a while ago.

Bryan McMahan in his grading suite at Modern.

How did you enjoy this version of dailies?

It used to be that dailies were where you got started in video. Color was very primitive back then, so it was like a starting position because there wasn’t much to do other than lace it up and let it go. Now, dailies are more technical than any part of the process.

But I enjoyed it. I was learning new stuff, and it was fun. I didn’t care for the hours (he laughs), but other than that, it was okay.

Yes, around this time three years ago, Terry shot two films — Knight of Cups and a yet unnamed title —back-to-back with about one month in between the two shoots. Knight of Cups was shot in LA, while the other unrelated film was shot in Austin, Texas.

Each shoot was about 45-50 days long so, all in all, it lasted about four months, and then Terry went into edits — he edits for quite a while.

When they were shooting, were they setting looks on set?

Can you talk about the workflow?

I was in communication with Chivo on a daily basis. We had a look that we were going for, but I would send him stills every day so he could get an eye on what I was doing, and then we would talk.

We wanted to get it very close to the final, because sometimes a director will go into edits for a year and get used to the look of dailies. Sometimes a director might even cut to them so it could inspire how he cuts the film. Then when he gets to the final color, if things were just done loosely and not very accurately, it completely throws it off. He’s used to the way it has looked for a year.

It’s better if we can get the color very close in the beginning, then when it comes to doing the DI, it’s a much smoother process.

What was the look Malick wanted?

Terry goes for what he calls a “no-look look.” He doesn’t want it to be warm or cold or especially moody, or light, or anything. He wants it to look as if you were looking through a window. It just should be very natural, which actually is a lot harder to achieve than giving something a look.

Let’s dig into the multiple camera formats used on the film. How many were there?

Both of the films were shot on 35mm, some 65mm, Arri, GoPro, and a little bit with Red and Blackmagic. GoPro, obviously, has a slightly different look, but it cuts in really well with 35mm, 4K and 65mm. It is amazing how well it works. It’s important to note that Terry shoots with the different cameras to achieve those slightly different looks.

What were your specific challenges relating to the different formats?

In the DI process it’s a little challenging, just because everything has a different resolution, everything’s a different size, so that becomes a little bit of a workflow — you just have to pay much more attention. Other than that, it worked out very well.

How did you work with those formats within the DaVinci Resolve?

When we did the conform in the Resolve, I grouped all the film shots and gave them a set of nodes, or a look and a sizing. I used colored flags, so I knew what every shot was as I was going through it.

Once I was cutting it together, once it was conformed, it already had the correct sizing, the correct look-up table, the correct overall color and things like that, so it actually worked out very well.

This was a 4K grade?

Yes, and the workflow is the same as 2K, other than needing a 4K projector and making sure the equipment is fast enough. But for me, it’s just a matter of looking at a picture. I don’t really treat a 4K job any differently than a 2K job.

Was there a particular shot or anything about Knight of Cups that stands out or was challenging in some way?

Well, it’s a Terry Malick movie that was shot by Chivo; it’s beautiful stuff. It’s amazing just to sit and watch. I’m lucky to be able to work with these guys. They’re beautiful pictures.

Challenging? The only challenging thing is that we did this all in clip mode, so everything was in its raw source. There’s two ways you can work on most of these boxes, and in Resolve, they call it either a sequence mode (everything in one sequence) or a clip mode (in its raw form where SAN is pointing to all the different cameras clips). Clip mode is becoming more and more the norm.

There were certain scenes, such as the ones in nightclubs, where I’m glad I had the raw because I had to go in and change the color temperature settings and exposure settings.

Are you done with the second “untitled” film yet?

Yes, we just finished the second one. There’s talk that Terry may want to do some changes, I don’t know yet, but overall we have finished both of them.