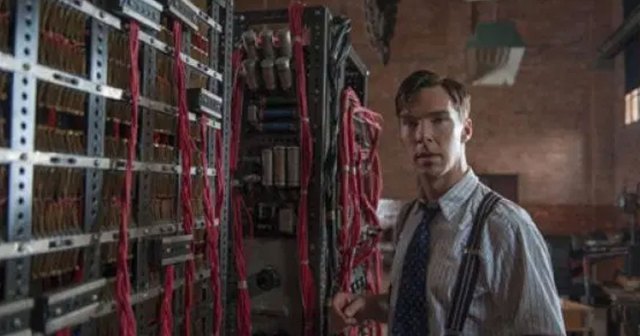 William Goldenberg’s path to editing The Imitation Game was an interesting one. He had never worked with director Morten Tyldum before, but a chance meeting at a party after the BAFTA Awards led to the pairing.

“I didn’t know who he was, and he was loud,” Goldenberg laughs. “This long-haired, Norwegian man came up to me and said he’d love for me to edit this film he was going to direct. His English wasn’t great, and I wasn’t quite sure what he was talking about, but I said, ‘Sure.’”

Goldenberg went on to forget about the meeting until a couple of months later when he received The Imitation Game script, and pieced it all together. Thus began the start of a beautiful collaboration.

Goldenberg calls the script, about the English mathematician Alan Turing who went on to crack the Germans’ Enigma code during World War II, “wonderful. And when I found out Benedict (Cumberbatch) was going to play Alan Turing, I thought that was a perfect casting. Morten and I then spoke at length over Skype; he was already in London prepping. I loved what he had to say about the movie, so I came on. Morten and I never really had met officially face to face about the film until after the movie was shot.”

Goldenberg, who won an Oscar for editing Argo (2012) has been nominated three other times for his work on Zero Dark Thirty (2012),  Seabiscuit (2003) and The Insider (1999). And this year he also co-edited Unbroken with Tim Squyres, which is in theaters now.

I got to talk in-depth with the very busy Goldenberg about The Imitation Game while he was in Pittsburgh at work on an yet-untitled feature film about concussions in the NFL.

You were editing in Los Angeles while they were shooting in London?

Yes, but Morten and I spoke many, many times during the course of shooting, and I was sending him footage, cut footage, all along the way. We didn’t meet in person about the movie until after shooting was completed.

How were you getting the footage? Were you keeping up with the camera?

Yes. I was getting the footage over the web. We were working in Santa Monica, so it would come to Company 3 and they would send it over to us by driver. We were essentially getting stuff later the next day. So, if they shot stuff on Monday, we would get it late in the day on Tuesday. It was pretty miraculous, considering they were in London.

I did keep up with the camera, which is what I try to do on every film if I can. Sometimes they shoot so much footage I can’t do it, but I did in this case.

When would you get it back to Tyldum?

Usually, unless there was something pressing, I would send it to them on Fridays. This way they could look at it in a little more relaxed way, as opposed to getting home after a 12 -or 13-hour shooting day and sitting in front of their laptop watching cut footage.

This was very important, especially since I wasn’t there to read the room. I like the director to look at stuff with a fresh pair of eyes, so they can look at it really objectively.

What kind of direction were you given in terms of the pacing?

I’ll put things together scene by scene, and each scene is sort of its own little movie. As I connect scenes together in longer stretches and the arc of the story is taking shape, I will make nips and tucks to make things flow better… so one thing informs another and the story is moving forward. For me, the overall pace of the film really isn’t shaped until the whole film is together and we’ve lived with it for a while and understand where it needs to be faster or slower, and what needs to be emphasized to make the story the best it can be.

The Imitation Game is based on a true story, but it’s also a thriller in a sense. How did that affect your editing?

They are racing against time to break the Enigma code to try to win the war, and if they don’t, people die. As I was cutting, I kept in mind that these people were in a hurry. At the same time, it’s a character study of Alan Turing, so you have to allow those moments to breathe and help the audience understand the subtext and the stress that Alan is under. It’s a real careful balancing act.

This isn’t an obvious VFX film, but there are a good amount of those shots. What was the workflow like?

There is a sequence in the movie where we see submarines on their way to intercept a British convoy, and those submarines fire torpedoes. That’s all CG. Initially, I was working with the previs while they were shooting. Then, when Morten got back to LA and we were in post, the effects gradually got better and better. I had pretty good previsualization on this movie and we got some temp shots early. Working with the visual effects in this movie was a really smooth process.

Do any other VFX shots stand out?

As we went forward, we felt like we needed to visually remind the audience of the war and have them see the actual bombing of London. So we added German tanks rolling across the countryside, burning bridges and German planes bombing London. Later in the film, there’s a burning convoy.

This was happening in the middle of cutting, so I found clips from other movies and from documentaries and stock footage to use as a rough template of the story we were trying to tell. Then a visual effects house took that, ran with it and created something unique. We were able to give them an idea of the flavor of what we wanted.

Is there a scene in the film that you are most proud of?

There’s a moment in the movie where they’re running out of time. Commander Dennison is trying to have Alan fired because he doesn’t trust him. He’s given Alan and his team a month to put a machine — basically the predecessor to the modern computer — together and have it work or he’s going to fire them all.

They are running out of days when they’re out having a beer and Alan overhears part of a conversation that gives him an idea key to helping the machine break the code faster. The problem is every day at midnight, the Germans change the settings in the Enigma box so they have to start all over again.

From that moment on they are wiring up the machine and trying their theory out to break the code… I just love that whole sequence. It’s really fast paced, and there’s an emotional release. After they’ve broken the code, they can’t tell anybody because then the Germans would change the Enigma box and Turing and team would have to start all over again. They have to keep it a secret and only stop enough attacks to win the war, but not to let the Germans know that they were on to them. So, there’s probably a half-hour sequence in the film that is all sort of one big idea, and I’m really proud of the way that works.

How important is your assistant editor on a film like this?

We’re a small crew — it was myself, my assistant editor Andrew Eisen and a production assistant. Andrew was invaluable. This is the first time we had worked together on a full feature. I involve my assistants a lot in the editing process. I like to run things by them and Andrew’s a creative guy; he’s done cutting of his own. It’s good to have people whose opinion you trust creatively so you can bounce things off of them. Even if you don’t agree with what they say, it’s valuable having another person in the room who lets you see things a little more clearly, especially if that person is smart and has good creative vision.

He is a first rate assistant in terms of keeping the room organized and doing the general assistant work — that’s expected. Where he goes above and beyond is the creative contribution.

You used Avid Media Composer Version 5 on this one. Can you talk about that?

The Avid has become an extension of my brain in a way because I’ve been using it so long. It’s instinctual. I don’t have to look at the buttons. The Avid allows me to present a movie or scenes from a movie as I’m going along, but they look like finished scenes. We were cutting in HD and were able to put in stereo sound effects, stereo music and all kinds of visual effects in the Avid, so by the time I show the movie to people it looks fairly close to a finished film. It allows the producers and directors to get a real sense of what the film will be like.

The Avid also allows you to make mistakes. When you’re working digitally, you can just make 100 copies and try 100 different things. You can fail endlessly and not destroy the film. I think it’s the willingness to make those mistakes that bring out some really great ideas, and that alone speaks volumes about how valuable the Avid is.

Getting away from The Imitation Game for bit, can you talk about your path to becoming an editor?

I was not a kid who was making Super 8 movies in their garage when they were 10, but I always loved the movies. I went to Temple University and was studying to be a doctor. When I realized that wasn’t what I wanted to do, I transferred to the film school. I thought maybe that would be a great career. I took a class called Experimental Video, and the teacher saw my work and encouraged me to be a film editor. It was the first time anybody ever encouraged me in the arts in any way in my life. It was an amazing moment.

After graduation I moved to California with the idea of being a film editor. After a year working as a production assistant, I got a job as an apprentice and over several years worked my way up to an assistant. Then I got to be Michael Kahn’s first assistant; Michael is Steven Spielberg’s editor.

After four years, I went off and started cutting on my own with his blessing. He would tell people I was good and say if they hired me, and it didn’t work out, he would come and cut a movie for free. That never happened, thank God (laughs), but it meant a lot to people to know that he thought that strongly about my abilities.

You’ve done some pretty serious films during your career. Is there any part of you that just wants to dive into a silly comedy?

I would love to do a comedy. I’ve done a little bit of it — The National Treasure movies have a lot of comedy in them, as does Argo, and there is even a fair amount of comedy in The Imitation Game. Obviously, that’s a different genre of movie and a different kind of comedy. But yes, I think it would be fun.

I have tried to mix up the genres that I work on so I don’t get typecast as an editor. Not only do I enjoy working in the different genres, I think it expands your career possibilities. That in turn will give me a lot more longevity as an editor because I don’t ever want to be just a comedy guy or the drama guy or the action guy. I want to be known as a good editor.